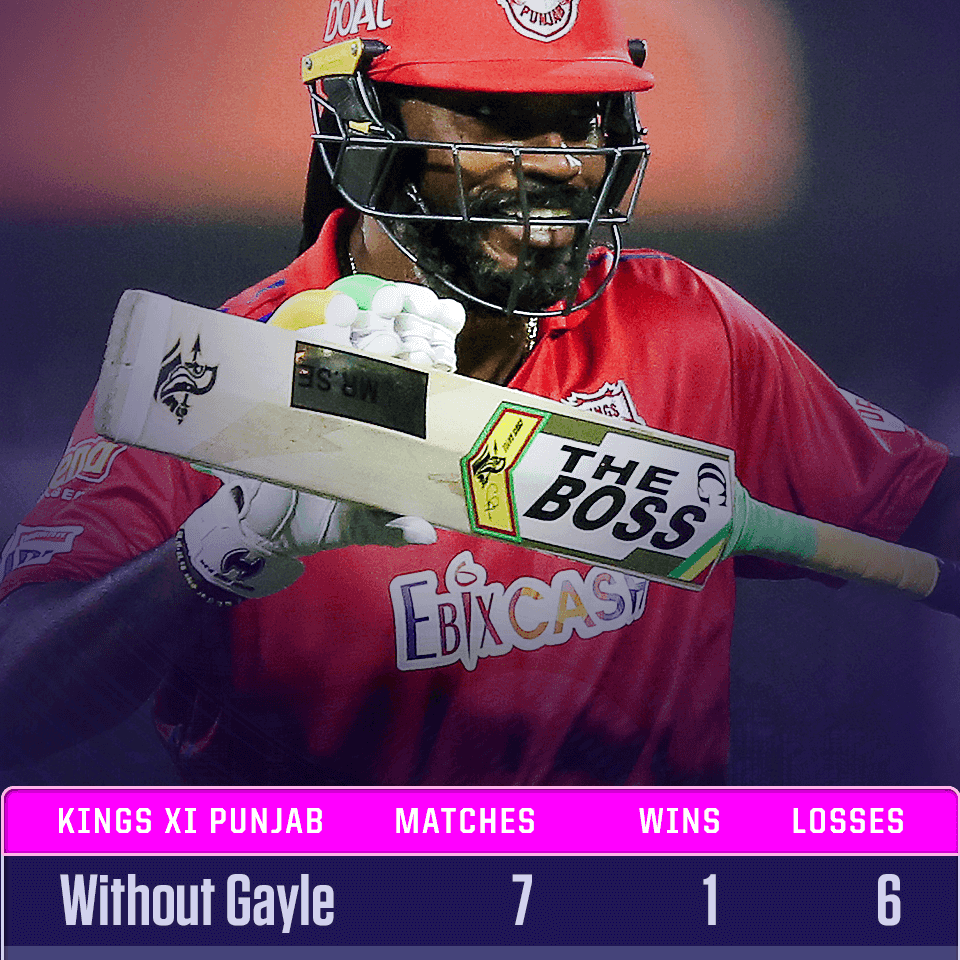 As the race for the playoffs gets tighter, we look at four overseas players who have given their teams’ qualification chances a significant boost after entering the stage around the halfway stage of the IPL

The Kings XI Punjab were reeling at the bottom of the table with only one win from seven games when Chris Gayle returned after a stomach bug made him miss two matches. Since then, the Kings XI have won five matches in a row and Gayle has featured in all of those.

One of the issues ailing the Kings XI was their middle order either not building on strong starts or not being able to close out chases. By incorporating Gayle at No. 3 – something he had done only five times in 396 T20 innings earlier – they have added both experience to their line-up and fear in the oppositions’ minds.

His 177 runs, studded with 15 sixes, have already handed them two eight-wicket wins, one five-wicket win, and two points from the double-Super Over game against the Mumbai Indians, in which he came out with the aim of hitting a six first ball in the second eliminator, and did it in trademark style to clinch victory. With Glenn Maxwell off form, Gayle’s intimidating presence at No. 3 has ensured that once their opening stand is broken, the Kings XI don’t slide and also sustain – if not increase – their scoring rate.

Named replacement for the injured Mitchell Marsh early on in the IPL, Jason Holder got a chance only when Kane Williamson picked up an injury after seven games. More than being a handy lower-order batsman, his ability to bowl both in the powerplay and the death has given the Sunrisers the cushion of a solid fifth bowler, which they were trying to squeeze out of their batting allrounders, especially in Bhuvneshwar Kumar’s absence.

Bowling in the powerplay against the Rajasthan Royals, Holder first struck by running out Robin Uthappa at the non-striker’s end with a direct hit. He then returned after the halfway mark and for the 19th over, first foxing Sanju Samson with a slow offcutter, and then putting the brakes with the wickets of Steven Smith and Riyan Parag in three balls and conceding just seven in the over and limit the Royals to a gettable 154.

Two days later, against the Kings XI, Holder got hit by Gayle in the last over of the powerplay, only to return four overs later and dismiss his West Indies team-mate. With another frugal over in the death and the wicket of Chris Jordan, Holder finished with 2 for 27 to limit the Kings XI to only 126 for 7, but the Sunrisers batsmen were bowled out for much less.

How the Royal Challengers use their allrounders has always been a big talking point. Chris Morris – who cost them INR 10 crore ($1.4 million) in the last auction sat out the first few games with a strain, and then burst on to the scene to help them fix a long-standing weakness: death bowling.

Morris has mostly bowled in the phases when batsmen go the hardest – powerplay and the death – and has kept his economy rate well under six despite sending down 17.4 of his 23.4 overs then. He has also picked up ten wickets to finish with figures that read more like standalone spells of outstanding bowling: 3 for 19, 2 for 17, and his best figures of 4 for 26.

Morris has been the most economical fast bowler this IPL by a distance, conceding only 136 runs from his 142 balls, while also striking every 14.1 deliveries, only behind Kagiso Rabada and Mohammed Shami (minimum ten overs) among the quick bowlers.

He breaches the 140kph mark, and has helped split the fast-bowling workload considerably, which was being carried by Navdeep Saini almost single-handedly.

If fast bowling is the flavor of the IPL, how can you keep Lockie Ferguson away? The Knight Riders did keep him on the bench initially because they were spoilt with their overseas choices, but once Sunil Narine and Andre Russell picked up injures, Ferguson got in, and impressed in his first game in seven months.

He delivered fiery yorkers at will and hurt the Sunrisers batsmen with his slower deliveries that also hit the hole to finish with 3 for 15. And once that game when into the Super Over, all he took were three deliveries to clinch victory for the Knight Riders.

With his express pace – over 150kph – and target to hit the top of the stumps, Ferguson has managed to stem the flow of runs from one end even though he hasn’t been as regular among the wickets since his first game. His awkward lengths that are mostly short or short of good length make it hard for batsmen to go after him, which makes him the tournament’s second-most economical quick bowler, behind Morris.

Watch Dream11 IPL 2020 Live Streaming on YuppTV from Australia, Malaysia, Sri Lanka, Pakistan, Continental Europe (Except UK and Ireland), South and Central America, Central Asia, and South East Asia (excluding Singapore) Countries. Indian Premiere League is back with the thirteenth season in 2020. Being one of the greatest sporting spectacles of all time, IPL…

International Leadership Summit 2021 – Bridging the generational gap, from millennials to baby boomers, for a brilliant exchange of ideas

The International Leadership Summit (ILS) continues to be one of the largest, transformative leadership conferences for visionaries, entrepreneurs, intrapreneurs, and leaders around the world.   Every year, thousands of aspiring entrepreneurs, tenured leaders, and influential change agents convene over three days to glean invaluable leadership insights from Bishop T.D. Jakes, ILS visionary and founder. Inspired…

IPL Playoffs 2020 Teams: Here are each IPL team’s chances of making it to the last four | Cricket News

With only eight matches remaining now before the IPL play-offs, the race to make it to the last four hasn't narrowed any further, since Chennai Super Kings lost their chance on Oct 25, after Rajasthan Royals beat Mumbai Indians. There are still 256 possible outcomes for the final line up and Net run rate (NRR)…